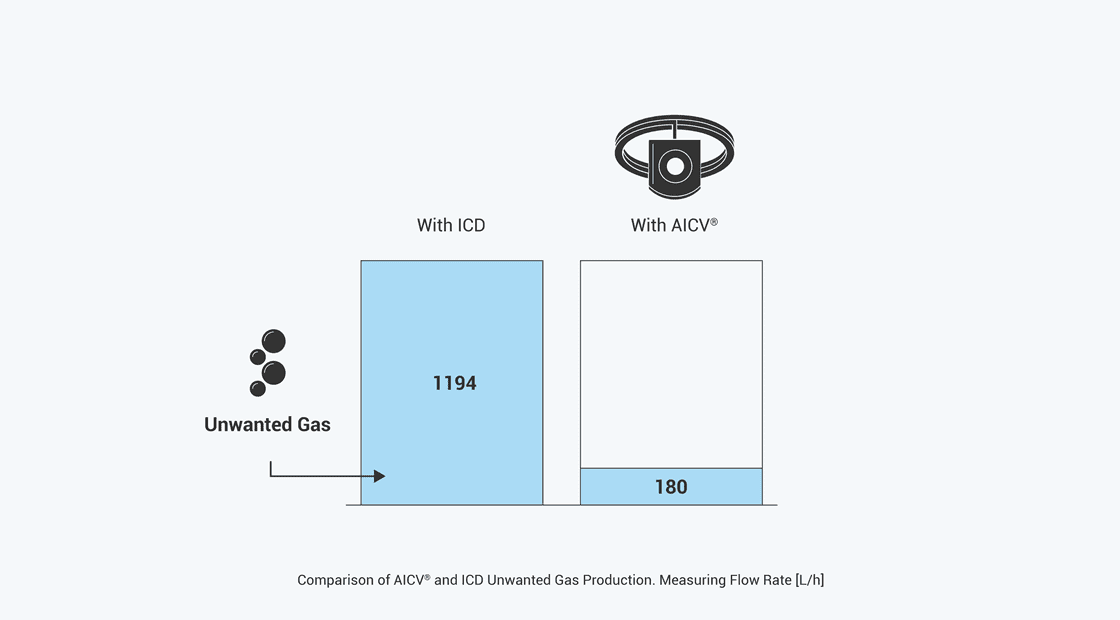 Provide an Autonomous Inflow Control device to effectively shut off steam within a SAGD Producing wells.

One of the main challenges in Steam Assisted Gravity Drainage (SAGD) wells is steam breakthrough in producer wells, which can result in inefficient bitumen recovery due to high Steam Oil Ratio (SOR). Flow Control Devices (FCDs), also known as Inflow Control Devices (ICDs), have been utilized for many years to balance the oil inflow along the horizontal wells and consequently delay or mitigate the unwanted fluid breakthrough. The newest generation of FCDs is a truly Autonomous Inflow Control Valve (AICV) which can optimize oil production, reduce SOR and significantly restrict the inflow of unwanted fluids such as water, steam and Non-condensable Gases (NCGs).  The operator wanted to verify this performance in an old well that was shut-in due to steam locking of the ESP pump.

The AICV technology was installed in a well previously suffering from major steam breakthrough and steam locking of the pump. In December 2015 a retrofit deployment was performed with 20 AICV’s segregated with AICV’s along the horizontal section of the well.

After the retrofit installation of the autonomous inflow control, the steam production was significantly reduced, and the oil production could continue. The well was shut in due to low fluid level and contact with steam along over 50% of the length of the horizontal section.  The installation of the AICV enabled the producer to continue production for several more months. The DTS log showed most of the producer at steam chamber conditions while the AICV’s allowed fluid production without steam locking the ESP. The trial proved success in installation without damaging equipment such as sand control or AICV’s, and verified application of the technology.

Contact InflowControl regional office for further details on this application

This novel AICV® design was tested in a full-scale high temperature laboratory flow loop that replicates down hole operating temperatures, fluid conditions and flow rates of a SAGD production well. The full-scale tests were conducted to determine how the AICV could optimize SAGD production by restricting the production of NCGs and steam and favor the production of oil.  Both single-phase and multi-phase flow performance behavior of the AICV® are presented. Furthermore, the results are compared with a conventional passive ICD to illustrate the significant potential of the AICV® in enhancing oil production, total recovery and overall project economics.

The results show that the production of lower temperature, relatively high viscosity oil can be increased by approximately 90% for the situation of deploying AICVs. Additionally, gas production is dramatically reduced from approximately 1200 L/h for the ICD, to 180 L/h with the AICV, corresponding to an 85%reduction. These results show that a considerable reduction in steam use is possible by using the AICVs, which would result in reduced energy usage for steam generation, reduced water usage, and reduced greenhouse gas emissions for each barrel of oil produced, thus improving the economics of SAGD projects.